In July I travelled with my friend to Iceland for an 80-90 km hike on the famous trekking route Laugavegur in the South-West Iceland. The trail takes you through the hot spring areas of Landmannalaugar to the glacial valley of Þórsmörk. The route actually ends in Þórsmörk, but you can continue with a 25 km hike over the Fimmvörðuháls pass between the glaciers Eyjafjallajökull and Mýrdalsjökull, and from there to the area with waterfalls at Skógar. We used the book The Laugavegur Trail: A Hiking Companion to Iceland’s Famous Trek by Brian W. Zimmer, as a guide when we planned our trip.

We flew directly from Helsinki to Keflavik, and stayed one night at a guesthouse in Reykjavik. We had chosen a cosy place, Gestinn Guesthouse, which I’ll recommend to everybody. It was near to the bus station and a five-minute walk from the city centre, and the staff was really helpful. From the bus station, BSÍ, we bought a hiking passport from Reykjavik Excursions. With it you get a bus transfer from Reykjavik to the base of the hike and again to Reykjavik from the hike’s destination when you are done. You just have to show up before the bus departs.

At the Laugavegur trail, you are not allowed to camp in the wild, so you have to pitch your tent at marked campsites close to the trail. At each campsite there is at least a hut, toilets and running water so you can fill up your water supplies.

We took a morning bus to Landmannalaugar, our starting point. We had planned to directly start our hike, but the hot pools were tempting, but we managed to keep our plan. The trail was crowded with day hikers in the beginning, but after a few kilometres we were quite alone. The surrounding mountains and volcanoes were colourful and down the valleys you could spot some grass fields. We had a short coffee break after the first real ascent on the trail, but kept going so we could reach the campsite before dinnertime.

The trend for the first day was uphill, with an elevation gain of 470 m. The surroundings changed to more rough. We reached Hraftinnusker campsite in the early evening. The ground was kind of rocky, but we found a place were to pitch our tent. There were also stacked rock walls as windbreakers here and there, but we had confident in our tunnel tent, that it would hold against the strong winds. 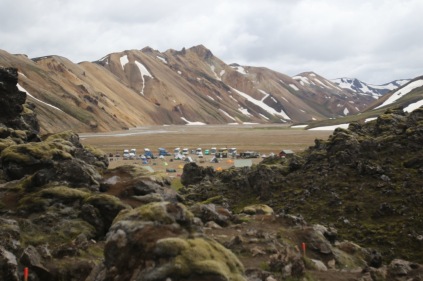 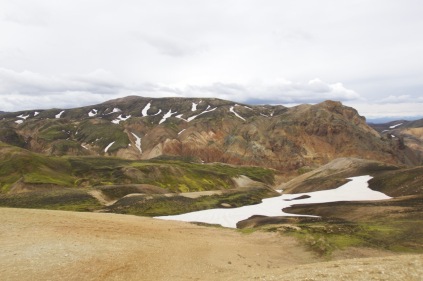 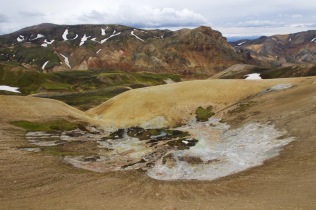 The night was windy and rainy, but we were more worried about our neighbours’ tents than our own… In the morning the visibility was really poor, but the weather cleared up before we took off for our next destination.

During the day the landscapes changed from rough surroundings to colourful mountains to green grassy fields. We also had to walk through snow, but that wasn’t any problem. On lunchtime we had reached the point were the day’s uphill mode was going to change to downhill, near Svartiryggur. From there the views were spectacular! You could see the big glaciers and our destination for the day, Álftavatn. 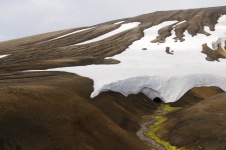 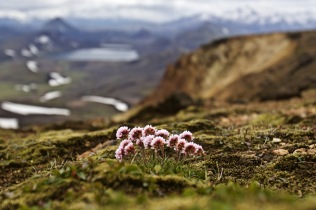 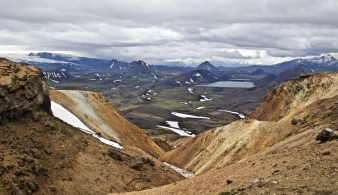 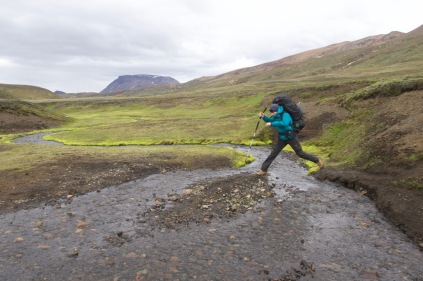 The morning at Àlftavatn was calm and sunny, so we enjoyed the morning by eating our breakfast outside the tent. We had two river crossings ahead us. The first one was knee deep and the second over the knee, and the water was really cold. On the second crossing you could really feel the current in the river. We used Crocs as river crossing shoes, and they worked just fine. For more strong currents I would recommend tighter neoprene shoes.

After the second crossing the weather changed, and the trend for the afternoon was rain in different portions. We had to keep our lunch break in the rain, and I think it was the fastest lunch break I have ever had… The last stretch for the day went through a sandy desert. We also logged a geocache that we found on the way. As many times before, the last kilometre felt endless. The campsite Emstrur-Botnar is located in a small green valley surrounded with deserts, so it felt like we were arriving to an oasis. 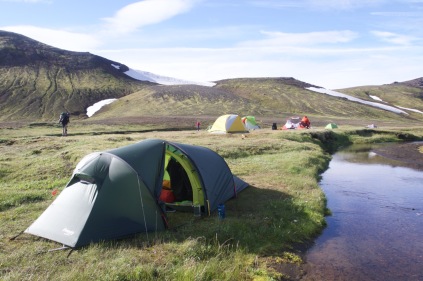 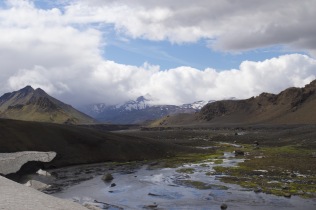 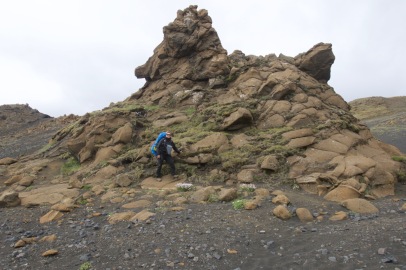 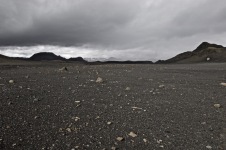 From Emstrur-Botnar the trail made a little detour across a canyon, Syðri-Emstrua. Fortunately there was a bridge over the canyon and some ropes helping you to get to the other side. The trail then led us over a sand flat and some lava fields. We found a perfect lunch spot down a small windless canyon. The harsh lava fields then gave away to some vegetation. We saw even our first tree! Well, it wasn’t a tall one, but at least it had a stem and leaves! And in a while we entered a small forest where we held a coffee break. The trail then led us over a ridge from were we spotted the river that we had to cross, Þrönga. At the crossing place the river was divided into several small streams. It was a tricky to cross, because there were so many route possibilities to choose from.

When we had forded the river we continued our journey through a green forest towards the Þórsmörk (Thor’s woods) area. We walked to a campsite Langidalur, which is the actual endpoint of the Laugavegur trail. We decided anyway to walk to the next campsite Básar, because we would continue the next day over the Fimmvörðuháls pass. To get to Básar we had to cross the river Krossá, but we didn’t have to ford it. There were two mobile bridges that we used to get to the other side. The campsite was cosy, and the wardens really helpful. We pitched our tent in a shrubbery with trees and bushes. 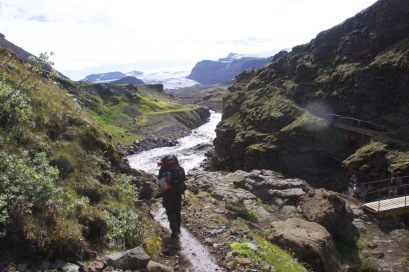 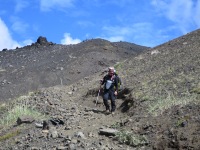 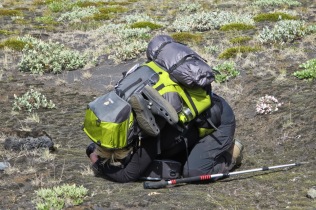 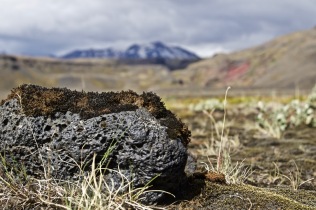 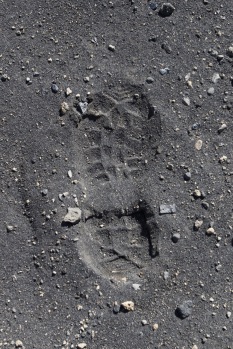 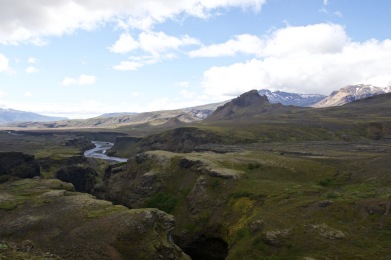 We woke up early in the morning, because we had a long day (25 km) ahead of us with a start of 900 m ascent. We climbed up a ridge and the trees faded behind us, which led us to another ridge, Kattaryggur. At some places there is a rope helping you to get safely over some steep parts. The trail gets steeper before you reach the Morinsheiði plateau. It was great to walk for a moment on a horizontal surface when we crossed the plateau. The next part was a traverse that was rope and wire assisted that led us to Heljarkambur. We had read from a guide book that the “traverse requires master-level dexterity and balance”. Well, despite our heavy backpacks we made it alive over the traverse! Then it was uphill again till we reached the highest point at the Fimmvörðuháls pass between the glaciers Eyjafjallajökull and Mýrdalsjökull.

When we reached the pass it was foggy and the visibility was really poor. It was even hard to follow the route markers, so we had help from our GPS. Then it changed to downhill, at last! In the beginning the trail down was really boring, because the route followed a road. But then the waterfalls started and the trail took off from the road! At regular intervals we saw waterfalls after waterfalls, one more magnificent than the other. So it kept on for 6 km until we reached our destination for the whole trip, Skógafoss – a giant waterfall with a drop of 60 m! For the last time we pitched our tent on the Skógar campsite, and prepared us for the bustrip back to Reykjavik the next morning. 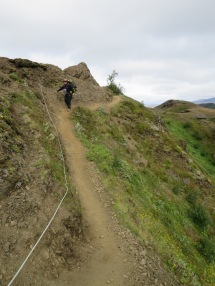 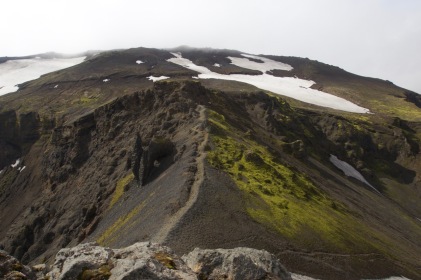 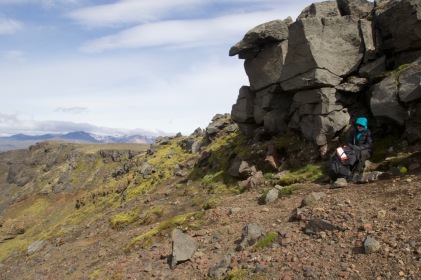 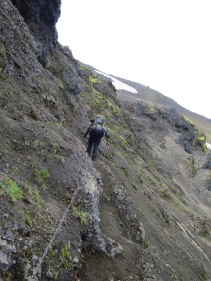 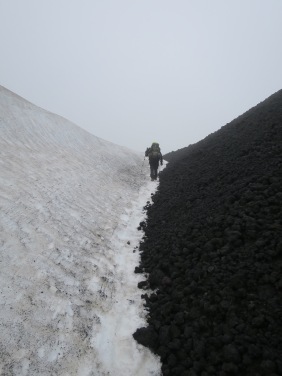 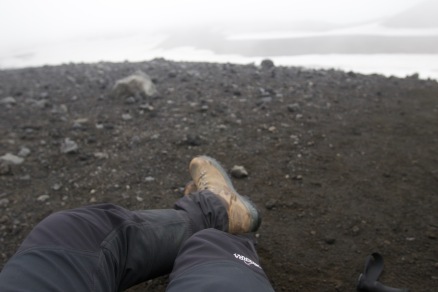 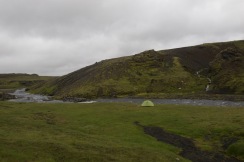 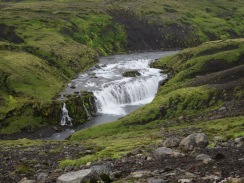 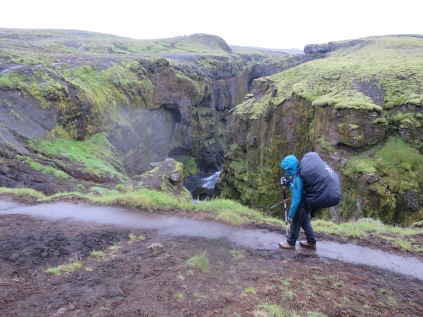 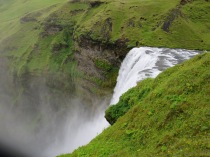 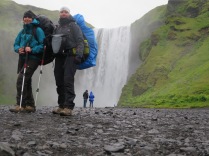